When I was in school, I had a great instructor, Vincent Tringale, a very talented artist who later became a professor at the Massachusetts School of Art. He conducted his own art classes at the local YMCA where I took classes. He tried to get me into an art school on a scholarship after graduation, but that never worked out. 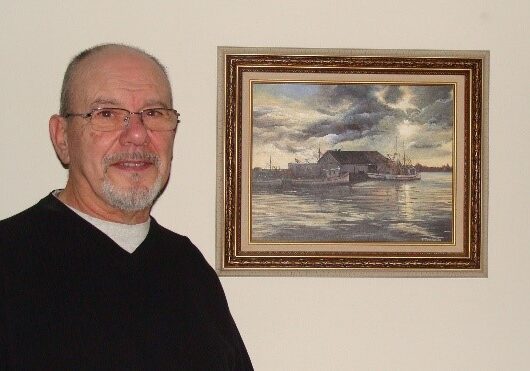 I have participated in many art shows and competitions. My works have been displayed in galleries in Rockport, Swampscott and Gloucester. I have done numerous portrait and special commissioned works. My varied collection includes many subjects from outer space, the southwest, nautical, country scenes, still life and portraits.

I did paintings of scenes, lighthouses and floral arrangements on roofing slate. In this medium, I started my own business and was represented by companies that sold items specifically to gift shops throughout New England and beyond. I also did many privately commissioned pet portraits on slate. Some of my works were sold in the nationally known Potpourri and Stitchery catalogs and one of my works was featured in Style magazine. I had the business for 14 years, but had to close it due to lack of assistance. I was a one-man operation and it became too much for me to do alone.

That’s when I went back to painting on canvas. I have a varied style and I will paint anything that moves me.

If you would like to purchase a painting, or if you have any comments, I would like to hear from you. You can contact me at:
f_tomasello@comcast.net or by phone at 978-587-2884 (Please leave a message).